Companies like SilverPop, Marketo, Genius, Eloqua, and Hubspot are all competing for market share. What I like best is that ClickPoint isn’t even in the discussion. I prefer to fly under the radar for as long as possible and let some of these guys spend insane amounts of money developing their software. ClickPoint was founded on $250,000 and has learned to do “more with less.” I believe this simple mantra has helped us focus on making money by providing software and service that is top notch. When you focus on delivering revenue, product, and culture instead of sheer numbers, I believe it’s a much better long-term recipe for success. Unfortunately, some of these companies are thrown into a tailspin with demanding VC companies expecting huge numbers out of the gate.

I certainly think it is great that this segment is finally getting the attention it deserves. I also find it is interesting to watch so many companies jump into the game and see how they evolve. It is my humble opinion that the ones developing the best software will ultimately win in the long run. Sometimes the best companies are the ones afforded the most time to perfect and architect their product. ClickPoint is lucky to be part of a public company that gives us the breathing room to aim for perfection in our software instead of merely churning out a bunch of content, websites, marketing materials and code; just to see who gets to the mountain top first. I look forward to chipping away at the market by taking time when bringing on new corporate clients, while also ensuring great service and ultimately the best software product money can buy.

Lead Nurturing Is All About Laying the Bricks

Lead nurturing is just one of the many features of ClickPoint lead management software. 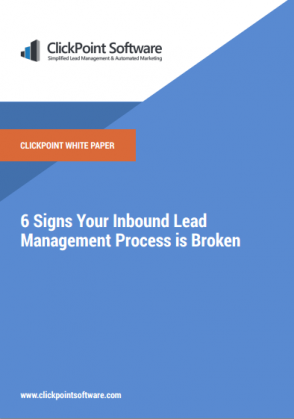